SOLD OUT: Join us Feb. 5 for our special event, ‘Valentine Tea’ 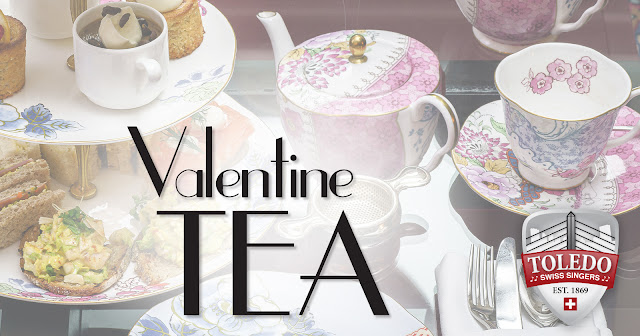 The Toledo Swiss Singers, one of the area’s oldest singing groups, will host a traditional high tea on Feb. 5, 2023.


Update (1/25):
This event is officially SOLD OUT!
Thank you to everyone for your support. We look forward to welcoming to this event, or our eighth annual dinner-theatre mystery event, on Saturday, May 6 and Sunday, May 7. 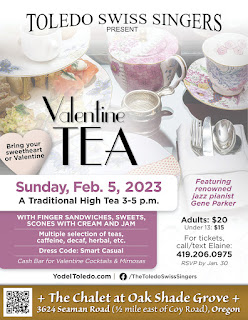 The special event, titled “Valentine Tea,” will feature all the fixings of high tea: finger sandwiches, sweets, and scones with cream and jam, along with a selection of teas.
Bring your sweetheart or Valentine!
The dress code is smart casual. There will be a cash bar featuring Valentine cocktails and mimosas.
The special Sunday afternoon tea starts at 3 p.m. and will feature renowned jazz pianist Gene Parker at The Chalet at Oak Shade Grove, 3624 Seaman Road in Oregon.
Tickets are $20, with $15 tickets for children under 13.
For tickets, call or text Elaine at:
(419) 206-0975.

Currently under the direction of Micah Graber, the choir has been a cultural staple in the Toledo area since 1869 — that’s 153 years of celebrating Swiss culture in the area. The chorus in its current form has been around since 1924. Its aim is to retain and preserve the culture and songs of Switzerland, to live up to the singers’ ancestors’ tenets of faith and behavior, help others, and to be good citizens.

The Singers perform two concerts annually, including a wide variety of traditional Swiss, Broadway, Gospel and American music, as well as a special performance in February.
For the 2022-2023 season, the Singers will present their eighth annual dinner-theatre mystery event, on Saturday, May 6 and Sunday, May 7, 2023.

The Swiss Singers practice Wednesday evenings at 7:00 at Oak Shade Grove from September to May.
Labels: special event