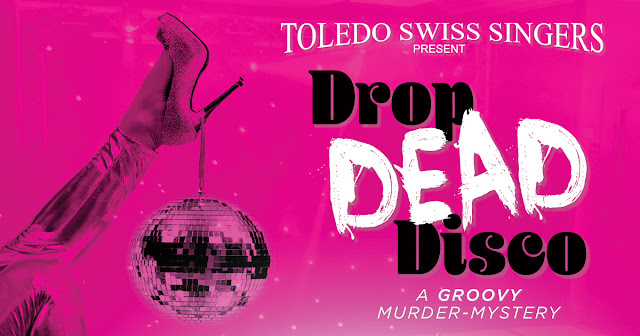 The Toledo Swiss Singers, one of the area’s oldest singing groups, will be asking the question, “WHO DUNNIT?” at their seventh annual dinner-theatre mystery event, held for two nights, May 14 and 15.
The evening, titled “Drop Dead Disco,” will feature a murder at the disco club — at The Chalet at Oak Shade Grove, 3624 Seaman Road in Oregon. 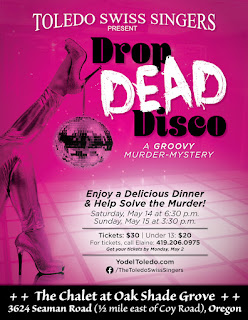 Dust off your disco duds, poof up your pompadour and get ready to get down at the hottest spot this side of the seventies — The Drop Dead Disco club. During the evening, there will be a mysterious cold-blooded killer on the loose. Who is the victim? When does it happen? Which character is responsible?
“Drop Dead Disco” will have audience members using evidence provided and making keen observations to carefully conduct their own investigations. Gather the clues and determine who could be the killer!
So dance out your wardrobe, ante up your attitude and hustle down to the disco club — where people are dying to get in. Enter to win the John Travolta Look-a-Like or Disco Queen Contest or just enjoy solving the mystery. Either way the competition could be stiff.
The evening will include a delicious menu: breast of chicken swiss, green beans almandine, buttered red skins, salad, rolls, desserts, a cash bar and, of course, the murder mystery.
Dinner begins promptly at 6:30 p.m. on Saturday, May 14 with the theatre presentation following, and the presentation begins promptly at 3:30 p.m. on Sunday, May 15, with dinner served during the performance. Tickets are $30.00, with $20.00 tickets for children 13 and under.
Reserve seats by May 2 by calling Elaine at (419) 206-0975.

Currently under the direction of Micah Graber, the choir has been a cultural staple in the Toledo area since 1869 — over 150 years of celebrating Swiss culture in the area. The chorus in its current form has been around since 1924. Its aim is to retain and preserve the culture and songs of Switzerland, to live up to the singers’ ancestors’ tenets of faith and behavior, help others, and to be good citizens.
The Singers perform two concerts annually, including a wide variety of traditional Swiss, Broadway, Gospel and American music, as well as a special performance in the spring.
The group is part of the North American Swiss Singing Alliance (NASSA), made up of 14 choirs from Canada and the U.S. Singers compete internationally every three years; the next competition will be held in June 2024 in Pittsburgh.
The nonprofit organization is also part of the larger German American Festival (GAF) Society, which most people associate with the festival held annually in August. The society consists of seven German-speaking societies. During the festival, the Singers set up and operate the Swiss Cheese Haus, along with the Stein Stossen contest. The GAF Festival draws more than 30,000 people on an average weekend and is the largest ethnic festival in this part of the country.
The Swiss Singers practice Wednesday evenings at 7 p.m. at Oak Shade Grove from September to May.
Labels: concert may murder mystery