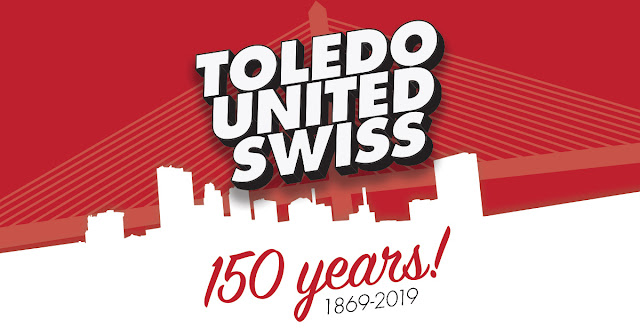 The Toledo United Swiss, which includes The Toledo Swiss Singers, will celebrate its 150th anniversary at a special celebration on Saturday, June 22.

Festivities begin at 2 p.m. with a cocktail hour, followed by a program at 3 p.m. featuring the Swiss Singers and dinner at 4 p.m. Music and dancing will take over the night following dinner.

Don't miss this celebration for one of the oldest groups in the area, all happening at The Chalet at Oak Shade Grove, 3624 Seaman Road in Oregon.

The Toledo United Swiss is part of the larger German American Festival (GAF) Society, which most people associate with the festival held annually in August. The GAF consists of seven German-speaking societies. During the festival, the Toledo Swiss set up and operate the Swiss Cheese Haus, along with the Stein Stossen contest. The GAF Festival draws more than 30,000 people on an average weekend and is the largest ethnic festival in this part of the country.
Labels: events swiss singers