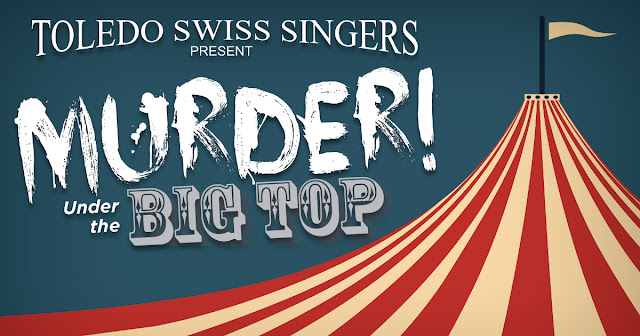 The Toledo Swiss Singers, one of the area’s oldest singing groups, will be asking the question, “WHO DUNNIT?” at their fourth annual dinner-theatre mystery event, held for two nights, Feb. 24 and 25.


The evening, titled “Murder! Under the Big Top,” will feature a murder at Hargrove’s Circus — at The Chalet at Oak Shade Grove, 3624 Seaman Road in Oregon. Enter the world of fabulous acts, exotic performers and mysterious management. Members of the audience will enjoy watching the drama unfold at the circus, along with some great musical performances. During the evening, there will be a mysterious cold-blooded killer on the loose. Who is the victim? When does it happen? Which character is responsible?

Written and directed by Swiss Singer Jane Williams, “Murder! Under the Big Top” will have audience members using evidence provided and making keen observations to carefully conduct their own investigations. Gather the clues and determine who could be the killer!

The evening will include a delicious Big Top menu: chicken schnitzel, potatoes, mixed vegetables, salad, rolls, desserts, a cash bar and, of course, the murder mystery. There will also be specialty coffees by Flying Rhino Coffee, circus sweets and treats available for purchase!

About the Swiss Singers
Currently under the direction of Micah Graber, the choir has been a cultural staple in the Toledo area since 1869 — that’s 149 years of celebrating Swiss culture in the area. The chorus in its current form has been around since 1924. Its aim is to retain and preserve the culture and songs of Switzerland, to live up to the singers’ ancestors’ tenets of faith and behavior, help others, and to be good citizens.

The Singers perform two concerts annually, including a wide variety of traditional Swiss, Broadway, Gospel and American music, as well as a special performance in February. The group will close out the 2017-2018 season with its spring concert on Sunday, May 6.

The end of the season also marks the culmination of three years of preparations for the Singers with Saengerfest 2018, an international Swiss singing and yodel festival that the singers are hosting in Toledo in June. The Singers are part of North American Swiss Singing Alliance (NASSA), made up of 14 choirs from Canada and the U.S. They compete internationally every three years; the most recent competition was held in June 2015 in New Glarus, Wis., where the group was awarded gold and silver prizes.