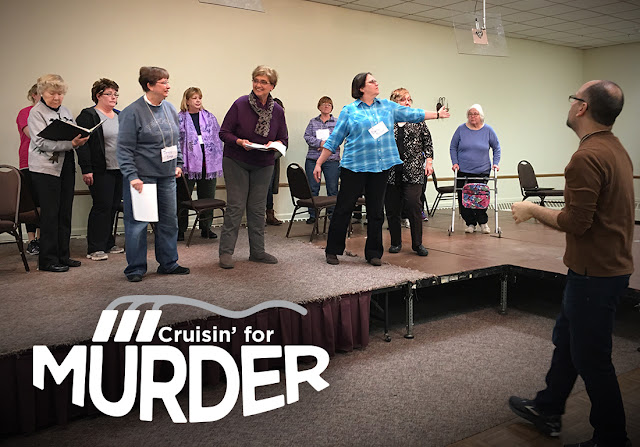 The Toledo Swiss Singers, one of the area’s oldest singing groups, will be asking the question, “WHO DUNNIT?” at their third annual dinner-theatre mystery event, held for two nights, Feb. 18 and 19.


The evening, titled “Cruisin’ for Murder,” will feature a murder on the final night of a cruise vacation aboard the Mystery of the Seas — at The Chalet at Oak Shade Grove, 3624 Seaman Road in Oregon. Members of the audience will enjoy watching the drama unfold on the final night, along with a musical review filled with award-winning favorites. During the evening, there will be a mysterious cold-blooded killer on the loose. Who is the victim? When does it happen? Which character is responsible?

Written and directed by Swiss Singer Jane Williams, “Cruisin’ for Murder” will have audience members using evidence provided and making keen observations to carefully conduct their own investigations. Gather the clues and determine who could be the killer!

The evening will include a delicious Bon Voyage cruise menu: Captain’s Famous Beef Tender Tips and Noodles, Stateroom Garden Salad, Deckhand Rolls, Castaway Glazed Carrots, Gangway Green Beans,
Anchors Away Desserts, a cash bar and, of course, the murder mystery. The theatre presentation begins promptly at 6:30 p.m. on Saturday, Feb. 18, and 3:30 p.m. on Sunday, Feb. 19. Dinner will be served during the performance. Tickets are $25.00, with $15.00 tickets for children 12 and under.

Currently under the direction of Micah Graber, the choir has been a cultural staple in the Toledo area since 1869 — that’s 148 years of celebrating Swiss culture in the area. The chorus in its current form has been around since 1924. Its aim is to retain and preserve the culture and songs of Switzerland, to live up to the singers’ ancestors’ tenets of faith and behavior, help others, and to be good citizens.

The Singers perform two concerts annually, including a wide variety of traditional Swiss, Broadway, Gospel and American music, as well as a special performance in February. The group will close out the 2016-2017 season with its spring concert, “For the Birds,” on Saturday, May 13.