Join us for our double-concert weekend May 14 and 15 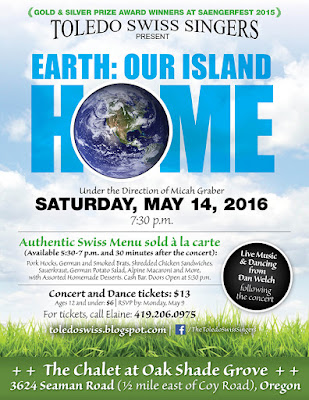 It will be a busy May weekend for the Toledo Swiss Singers, one of the area’s oldest singing groups.

May 14
The singers will celebrate our home planet May 14 at their annual spring concert.

The concert, titled “Earth: Our Island Home,” will feature songs dedicated to Earth, along with traditional Swiss songs. The evening begins with authentic Swiss food sold à la carte, available 5:30-7 p.m. and 30 minutes after the concert at The Chalet at Oak Shade Grove, 3624 Seaman Road in Oregon. The concert begins at 7:30 — and is followed by dancing to live music by Dan Welch.

May 15
On Sunday, the singers will perform a special free community concert at 4 p.m. at the Monroe Street United Methodist Church, 3613 Monroe St. Learn more by visiting Monroe Street's website.

About the Swiss Singers
Currently under the direction of Micah Graber, the choir has been a cultural staple in the Toledo area since 1869 — that’s 147 years of celebrating Swiss culture in the area. The chorus in its current form has been around since 1924. Its aim is to retain and preserve the culture and songs of Switzerland, to live up to the singers’ ancestors’ tenets of faith and behavior, help others, and to be good citizens.
The Singers usually perform three concerts annually, including a wide variety of traditional Swiss, Broadway, Gospel and American music.

The Swiss Singers practice Wednesday evenings at 7:30 at Oak Shade Grove from September to May.
Labels: community concert may spring