Calling all singers Sept. 9 to our open house 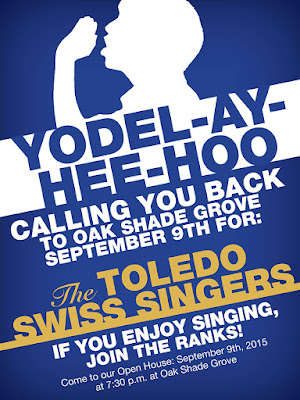 The Toledo Swiss Singers are looking for singers and Sept. 9 is the perfect time to see what we're all about.

Our open house is Sept. 9. If you are thinking of stopping by or would like information, please let us know via email: toledoswiss@gmail.com.


The non-profit organization is also part of the larger German American Festival (GAF) Society, which most people associate with the festival held annually in August. The society consists of seven German-speaking societies. During the festival, the Singers set up and operate the Swiss Cheese Haus, along with the Stein Stossen contest. The GAF Festival draws more than 30,000 people on an average weekend and is the largest ethnic festival in this part of the country. 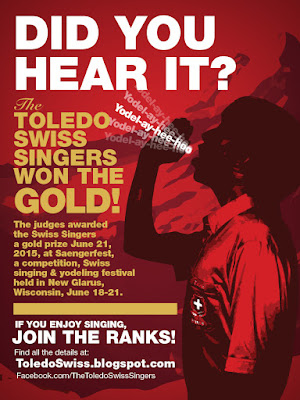 The group was awarded a gold prize in June at Saengerfest, a competition, Swiss singing and yodeling festival held in New Glarus, Wisconsin, June 18-21. The Singers were presented with the special wreath for their mixed-choir German prize song “Waldeinsamkeit” by F. Abi. Ladies from the group were presented with a silver prize for their singing of the French song “Marine” by J. Mamie.

After accepting the gold and silver prizes, the Singers made a special announcement that they would be hosting the next Saengerfest in 2018. Toledo has hosted five Saengerfests: 1901, 1924, 1962, 1982, and 2006.
Labels: open house practice swiss singers